What does "Classical" mean?

We often use the adjectives classical and quantum to describe two different regimes of physics study. What's the difference?

How much do we know?

Where is this ball located right now? Be precise as possible.

What is its velocity? Be precise as possible.

"We may regard the present state of the universe as the effect of its past and the cause of its future. An intellect which at a certain moment would know all forces that set nature in motion, and all positions of all items of which nature is composed, if this intellect were also vast enough to submit these data to analysis, it would embrace in a single formula the movements of the greatest bodies of the universe and those of the tiniest atom; for such an intellect nothing would be uncertain and the future just like the past would be present before its eyes."

The quote above is often refered to as "Laplaces Demon". It summarizes the idea of a deterministic universe, where, if we could only measure things precisely engough, and had unlimited computational power, we could predict the entirety of the universe's future. From his work: A Philosophical Essay on Probabilities

A particle is moving in the x-direction and is confined between two perfectly bouncy (ahem, elastic) walls so that it bounces back and forth between $x=0$ and $x=l$, where $l$ is the distance between the two walls. If there is an uncertainty in the initial velocity measurement, i.e. $\Delta v_0$, find the subsequent uncertainty in position at time $t$ later.

Let a particle start from point A and move towards B. Assuming this is a perfect circle and that collisions with the walls are totally elastic, will it ever come back to point A? If so, how many bounces will it take?

Then, particle A will never return to the exact starting point. Interesting. One system is closed and periodic, the other is open and non-periodic. All just by changing the initial velocity.

If we know how things move in the forward direction of time, can we also know how the process would happen in reverse?

Largely Mechanics (i.e. 20700) but with some references to electric fields and other 20800 material.

What are Newton's 3 Laws of motion?

What are the implications of the conservation of Energy?

This is Newton's second law. It says the derivative of velocity w.r.t time is equal to the net force acting on the object divided by the mass. In intro physics, we mostly never had anything funny on the R.H.S. of the equation. It was generally a constant $F$. Now, we're going to be all sorts of things in that $F$. They might be time dependant, velocity dependant, etc. That makes solving the equation harder. 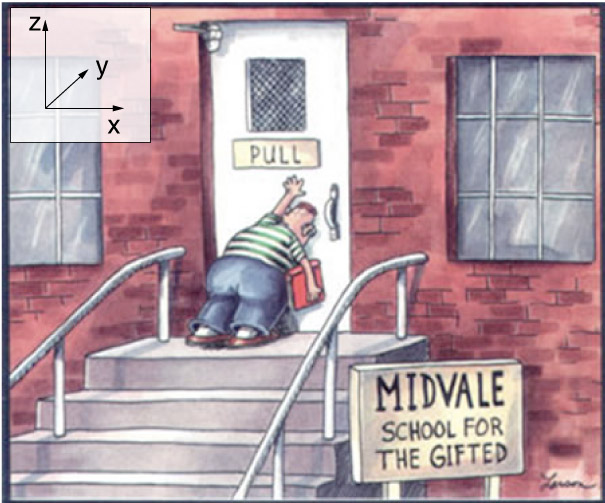