What is the angle $\beta$ equal to?

This picture represents the origins of the trigonometric relations. Inscribe a right triangle inside a circle. Now, the angle theta is one of the angles of the triangle. The ratios of the various sides make up the trig functions.

To make predictive models of the physical world, we'll need to make visual models, which we can then turn into analytical statements. Many of the models will be geometric in nature. Thus, we'll need things like the trigonometric relations to establish relations between the components. In the triangle shown here, one angle is marked with a $\theta$. The sides are labeled in relation to this angle: opposite, adjacent, and hypotenuse. So, $\sin (\theta)$ is defined as the ratio of the side labeled opposite to the side known as the hypotenuse.

This one might be a little less familiar, but the same rules apply.

We can also use the inverse trigonmetric functions.

The inverse trig functions take the ratio of lengths (a dimensionless number) and return an angle (in degrees or radians). 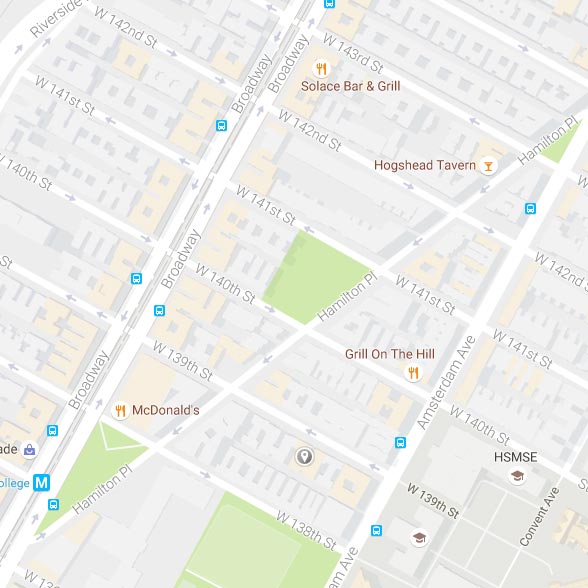 We'll use this relationship all the time.

These are two different mathematical or physical entities.

Scalars: A scalar quantity is completely specified by a single value with an appropriate unit and has no direction. (e.g. $20)

Vectors: A vector quantity is completely described by a number and appropriate units plus a direction. (e.g. person walks 2 km E)

When thinking out the physical world, you should intuitively notice that certain quantities or phenomena have different effects depending on which way they are pointed, in other words, their effects depend on their direction. For example, it's a lot easier to walk with the wind blowing in the same direction as your motion, rather than the other way: walking against the wind. There are two vector quantities at play in this example. Your direction of motion (that would be inferred from your velocity vector) and the velocity of the wind. When they point in the same direction, your motion is aided by the wind, when they are in opposite directions, your motion is impeded. Not only do the magnitudes of these two quantities matter, but so do their directions. And thus, we need to use vectors.

A particle travels from A to B along the path shown by the dotted red line. This is the distance traveled and is a scalar

When writing math by hand, just put an arrow on top of the variable. This will indicate it is a vector: $\overrightarrow{A}$

In printed text, you'll see vectors either in bold face: $\mathbf{A}$ or with an arrow: $\overrightarrow{A}$

If we want to refer to the magnitude only of a vector quantity, we can use absolute value bars: $|A|$, or just in italics: $A$.

All of the vectors shown are equal in magnitude and direction, thus they are equal.

It might be helpful to think of vectors a notation like this: $\mathbf{A} = \rm (mag, dir)$. Thinking this way we can see that the definition of the vector only requires two elements, the magnitude and the direction. If we can another vector $\mathbf{B}$, with the same magnitude and direction, it would necessarily have to be equal to $\mathbf{A}$.

Adding two scalar quantities is easy. We just add them like we would add any normal quantity.

However, vectors involve more math. We have to also take into account which way they are pointing. 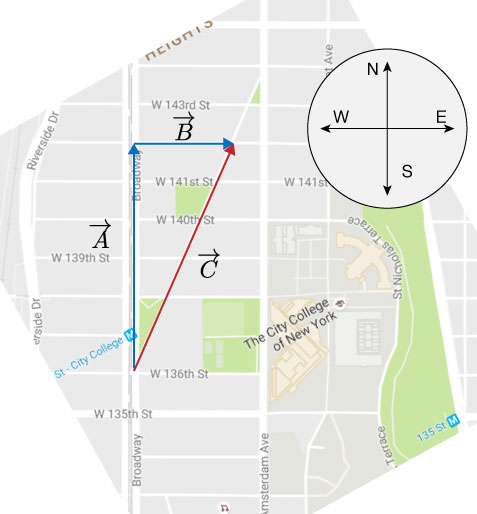 The two blue vectors are added together resulting in the black-dashed vector. You can drag each of the blue ones around, change its magnitude and direction, and observe the change in the resultant. 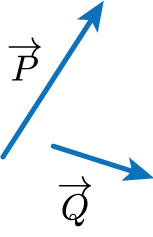 Negative of a Vector

The negative of a vector is simply a vector with the same magnitude, but pointed in the opposite direction.

Multiplication of a Vector times a Scalar

The result of the multiplication or division by a scalar is a vector.

The magnitude of the vector is multiplied or divided by the scalar.

The components of a vector are the parts of a vector that point along a given axis. We'll use the Cartesian Coordinate System most often.

Here's another vector $\mathbf{A}$ decomposed into its $x$ and $y$ components.

Here is a vector and its x and y components. Change the vectors magnitude and direction and observe the components.

Here are the components of $\mathbf{R}$:

We can use these vector components to add two arbitrary vectors together. (notice that $\mathbf{A}$ and $\mathbf{B}$ are not at right angles to each other.)

A car travels 20 km due N and then 35 km in a direction 60º W of N. Find the magnitude and direction of the car’s resultant displacement.

A unit vector is a vector that has a magnitude of exactly 1, and points in a given direction.

Rather than always using the $\theta$ and magnitude of a vector to describe it, we can use the unit vectors.

There are two ways of multiplying vectors:

1. The dot product (or scalar product)

The second method produces another vector:

2. The cross product (or vector product)

This produces a third vector that points perpendicular to both the original vectors.