Mr Mittens is moving towards a frictionless ramp at a constant velocity...

But, really they have durations in time.

For collisions, we have tools to analyze how these interactions work.

How long is a golf club in contact with a golf ball for?

We’ll call the area under this curve impulse, $J$.

The area under this triangle is easy to figure out.

However, in the case a non uniform force, we can rely on integration techniques.

The area under this triangle is easy to figure out.

The linear momentum , $\overrightarrow{p}$, of a particle or an object of mass m moving with a velocity $v$ is defined to be the product of the mass and velocity.

What’s $\Delta \overrightarrow{p}$ of the cart after bouncing off the wall? ($+x$ is to the right) 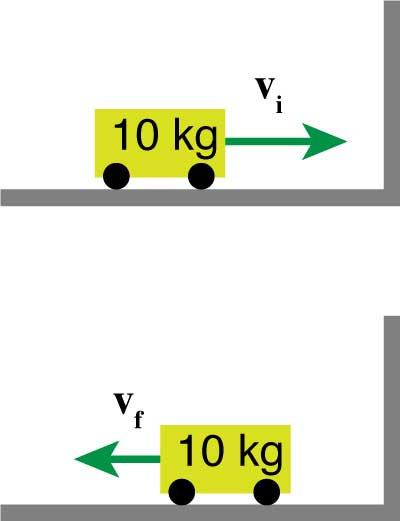 The impulse delivered to an object equals the object’s change in momentum.

Or, we can always rearrange this equation a little bit: 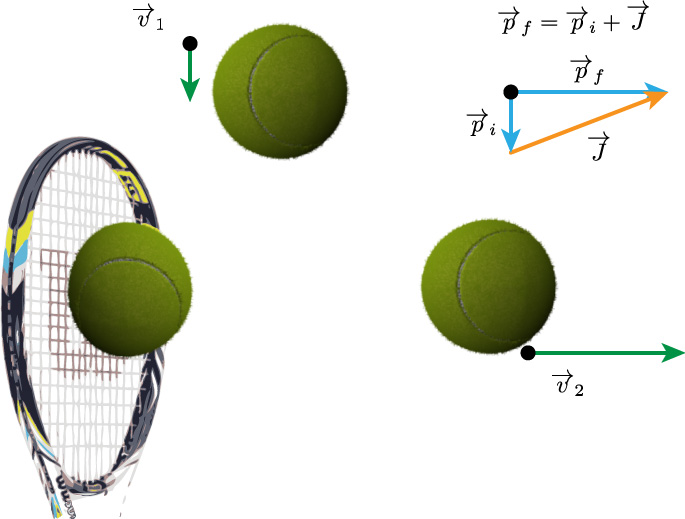 We can use Newton's second law to make a little more sense out of this:

“If no net external forces act on a particle, then the particle’s momentum is constant”

Also: the concept of inertia

“If no net external forces act on a particle, then the particle’s momentum is constant”

Also: the concept of inertia

A 1 lb bouncy ball and a 1 lb ball of clay are thrown at a wall with equal speeds. The bouncy ball bounces, the clay sticks. Which object exerts a larger impulse on the wall?

A conservation law states that some quantity of an isolated system never changes as the system evolves in time.

Why is momentum conserved?

A 3 kg cat sitting on a 1.5 kg piece of cardboard on a frozen lake wants to jump to shore without touching the ice. If there is no friction between the cardboard and the ice, when the cat jumps horizontally to the shore. the cardboard will move in the opposite direction with a velocity:

A 5000 kg train car is moving at 22.0 m/s. It starts raining, a lot. Later, the car is rolling at a speed of 20 m/s. Assuming the only thing that changed was the mass of the car due to the water, how much water has been collected in the car?

Elastic: An elastic collision involves no loss of energy. That is, the kinetic energy is the same before and after.

Let's have an elastic collision between these two marbles.

In class: The ballistic pendulum

Based on the angle $\theta$, we can figure out how fast the bullet was traveling.

A hockey puck is sliding on ice at 12 m/s. It is hit with a hockey stick which delivers an impulse of -4.0 kg m /s. This causes the puck to travel in the opposite direction at the same speed. What is the mass of the puck?

Here is a collision between 3 marbles taking place in 2 dimensions.

A hockey puck is sliding on ice at 12 m/s. It is hit with a hockey stick which delivers an impulse of 4.0 kg m /s. This causes the puck to travel in the opposite direction at the same speed. What is the mass of the puck?

A 10 gram particle is traveling east at 2.0 m/s when it explodes into 3 pieces. A 3 gram fragment goes west at 10 m/s while another 3 gram fragment travels 40 degrees north of east at 12m/s. What are the speed and direction of the third fragment?

Gravity is a force acting on this blue pole. It acts everywhere, but if we needed to pick a place, $r$, to put the force arrow, where should we put it?

What about this one?

There is a special point in a system or object, called the center of mass, (CM) that moves as if all of the mass of the system is concentrated at that point

The system will move as if an external force were applied to the total mass M located at the center of mass.

For a simple case, like two equal masses on a stick, our intuition should tell us that the center of mass is just in the center of the rod.

But, intuition is not enough sometimes...

Center of mass of a system like the following will be given by:

For a system of $n$ particles, we can generalize into the following. If:

Center of mass of a system like the following will be given by:

There are 3 object located on the x axis: Their masses are 1,2, and 3 kg and positions are x = 1m, 2m, and 3m, respectively. Draw this system and locate the center of mass

Find the center of mass of these three particles: (assume all masses are the same)

Newton's laws for a system of particles.

Find the center of mass of a uniform rod of length L and mass M.

Find the center of mass of this triangle.