A wooden box is released from rest near the top a wooden ramp... 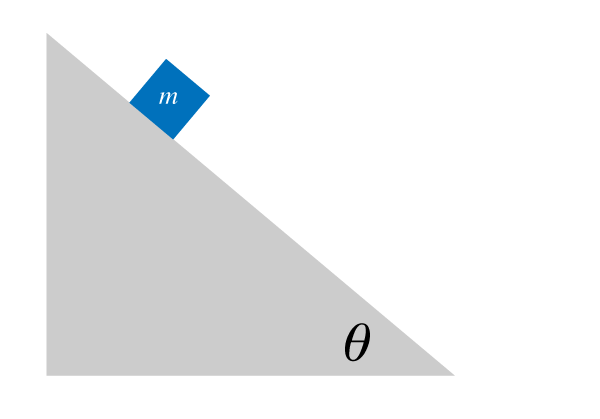 This is word that means a lot of things depending on the context:

Energy is another example of a word that we use very often in regular speech. However, in physics it has a specific meaning.

Energy is a scalar quantity.

The unit is called a Joule, after Mr. Joule

The different energies of a system can be transferred between each other.

For us, Work will be defined as the process of transferring energy between a well-defined system and the environment.

An example of work

A constant force is applied to this box as it moves across the floor. 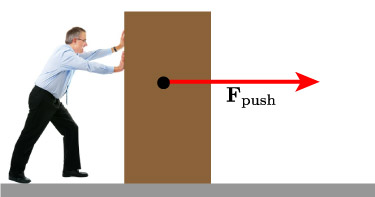 This is for the case of a constant force which is applied in the same direction as the box is moving.

If Work is equal to Force times Distance, what are the fundamental SI units of Work?

But what if the force is not in the exact same direction.

Now we have to consider the component of the force which does point in the direction of the distance traveled.

What is the work being done on the bag by the person carrying it?

I swing a ball around my head at constant speed in a circle with circumference 3 m. What is the work done on the ball by the 10 N tension force in the string during one revolution of the ball?

We said there we many different forms energy can take (chemical, thermal, potential, etc)

Kinetic Energy is the energy associated with moving objects.

Two balls of equal size are dropped from the same height from the roof of a building. One ball has twice the mass of the other. When the balls reach the ground, how do the kinetic energies of the two balls compare? (assume no air resistance)

Since the work is related to the amount of energy either entering or leaving a system, we can establish a relationship between the work done on an object and the kinetic energy. 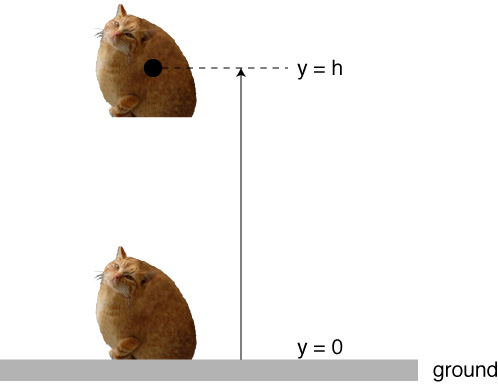 We can store energy in a gravitational system by separating the two objects.

The cat, when lifted off the ground, has a gravitational potential energy.

Potential Energy is only dependent on the height!

It doesn’t matter the path an object takes while climbing higher away from the earth. Any route which ends at the same point will impart the same amount of gravitational potential energy to the object.

Changing the potential energy of an object requires work.

In the case of gravity:

In this case we let an object drop, and gravity does positive work.

In this case, we raise an object, and gravity does negative work. 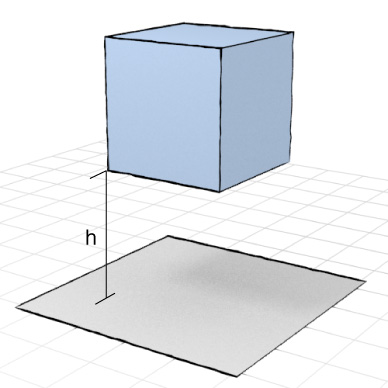 Let's now take a look at systems which have both kinetic and potential energy.

For example: this box which is located at a distance $h$ above the ground.

If these are the only two types of energy in the system, then we have a very special situation.

We can define the total mechanical energy energy of the system as the kinetic + potential.

If we don't worry about any of those retarding forces like friction or air resistance, then we can say that the total mechanical energy of a system remains the same as time advances.

Upon dropping a ball, the total mechanical energy is conserved.

Should this student be worried?

A mass $m$ is released from rest on a spherical, frictionless bowl...

Block on a ramp

Notice: we use regular, non-rotated coordinates for this problem. Try it with rotated axes and see what you get. Should it be different?

Ex: The Loop the Loop

We saw that if the velocity of the object was large enough, then it would remain inside in contact with the loop.

A successful loop-the-loop looks like this. The ball remains in physical contact with the road at all times. (This is another way of saying the normal force is not zero.)

An unsuccessful loop-the-loop looks like this. The ball looses physical contact with the road at all times. (This is another way of saying the normal force becomes zero.)

In the case where the velocity is not fast enough to get the ball all the way around the loop, the ball looses contact with the road near the top. 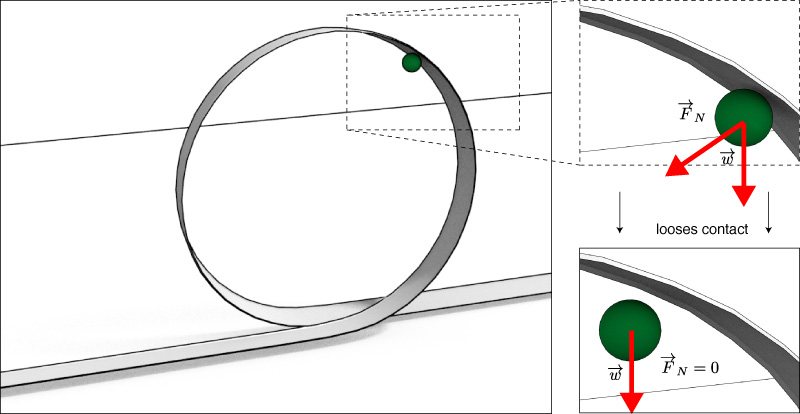 At the top of the loop, the sum of forces pointing towards the ground will be given by:

Since this is circular motion, we have

Thus we can write:

What is the minimum velocity at the top of the loop needed to complete the loop-the-loop for a regular, no friction, sliding object.

What is an expression for $h$ that would lead to a speed so the ball maintains contact at all times?

Most of the forces we have seen can be classified as non-conservative.

The exception is Gravity.

Here are two definitions for a conservative force:

2. A force is conservative if there is zero net work done while moving an object around a closed loop, that is, around a path that has the same point for the beginning and the end. 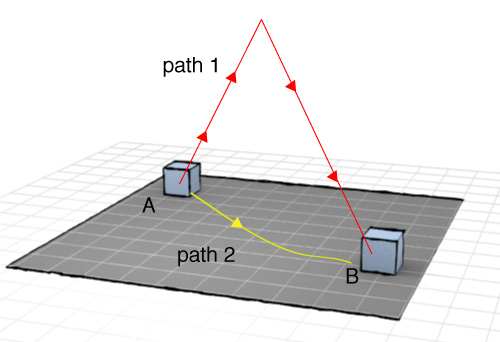 If we look at the change in potential energy, $\Delta U_\textrm{grav}$, then we'll see that the Work done by gravity on the box in either case is equal to zero. And, for any other path you can imagine, it's also zero.

Here is an example of a conservative force interacting with a box. If we slide the box from point A to B along path 1, we can calculate the work done by figuring out the work done by gravity to go from the ground up to the apex, and then back down to the ground. Adding these two works together will result in zero, since on the way up, gravity is pointing against the displacement vector: [$F_G d \cos(180^\circ$)] and on the way down, gravity will be in the same direction as the displacement vector: [$F_G d \cos(0^\circ$]. Thus, these two values are equal in magnitude but opposite in sign and so when that are added together will be equal to zero. In the case of path 2, the work done by gravity will be zero also, since there is no change in height along the path. Thus, no matter how we chose to go from the A to B, the net work done by gravity will be zero. This is the definition of a conservative force.

Moving a box along 2 paths in the presence of friction. 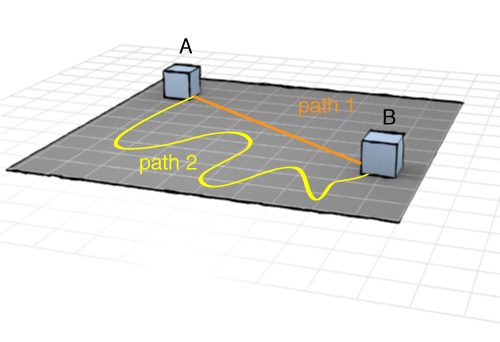 The situation is very different if we ask about the work done against friction during these two paths. Path 2 will require more work than path 1.

Now, if you want to move the box from A to B, but are asking about the work done by friction on the box during the motion, the shorter path (path 1) will result in less work. Since the force of friction is always opposite to the direction of motion, there will never be the case of canceling out like we had in the gravitational case. Path 2 will lead to more work being done by kinetic friction, which is therefore considered a non-conservative force.

And so, forces like friction and air resistance are considered non-conservative.

We can however account for these forces in our analysis of certain systems.

If the change in energy is non-zero, bewteen the initial and final times of a mechanical system, then there must be some non-conservative forces doing work during the motion.

Now, we have a ramp that has some friction.

How can we describe the motion of a box on this ramp?

If the object slides down a hill with an elevation of 10 m, where will it stop? Consider the sloped part frictionless and the rough part at the bottom having a $\mu_k$ equal to 0.3.

Again, here's another word we have to be very careful with. We might be used to calling anything that seems strong 'more powerful'.

For us however, we'll need to restrict our use of the word power to describe how fast a process converts energy.

A unit of power in the US Customary system is horsepower:
1 hp = 746 W 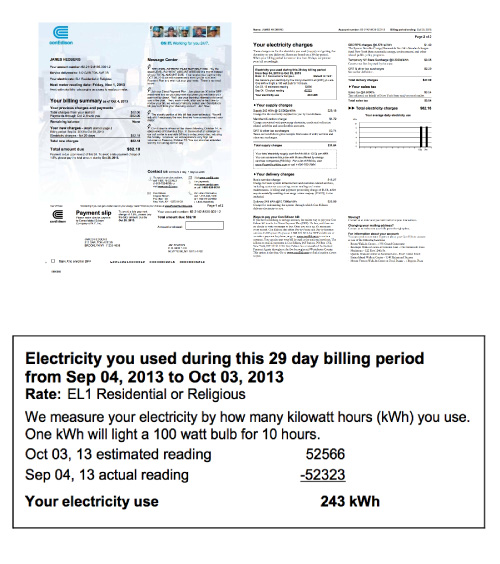 We should be able to understand these mysterious documents now.

How many Joules of energy did I use?

How many pushups would I have to do to generate that much energy?

I used to work out on a rowing machine. Each time I pulled on the rowing bar (which simulates the oars), it moved a distance of 1.1 m in a time of 1.6 s. There was a little display that showed my power and it said 90 Watts. How large was the force that I applied to the rowing bar?

In the most basic situation, the force applied to an object was constant. When this is the case, the Work was given by:

This is also equal to the "area under the curve"

However, it's also possible that the work will vary as a function of distance. In this case, the work will not be given by the standard form, because, the F is not constant.

However, the work is still equal to the "area under the curve"

We don't have the tools (i.e. integration) to be able to do much with this at this level of physics.

To deal with these situations, we'll have to use some integration techniques.

Here's an applied force that varies as the square of the distance.

We could figure out the area under the curve, which does equal the work, but performing the integral

If our forces are variable and 3 dimensional, (and perhaps not pointed directly in the direction of the displacement), then we have to use some more developed vector calc:

Or, if we integrate over the distance:

Since work is a scalar, then these terms will just add up without any complications.

We should be able to show that this gets back to kinetic energy somehow...

Based on the above:

Now we can take the derivative with respect to x:

Based on the the relation between work and potential energy:

If the force from an elastic band when stretched is given by $F = -k x$, what would the change in potential energy be for an object attached to the rubber band and pulled back by a distance d? (k is a constant that is determined by the rubber band material ) Plot the force and $U_\textrm{rubber band}$ as functions of distance.

Shown is the potential energy of an unknown force as a function of distance along the x-axis. Where would that force be the largest, and pointed in the positive direction?

A diatomic molecule has two atoms (H2 for example). If the potential energy of such a system is given by:

Find the equilibrium separation of such a molecule. That is, find a distance $r$ that will lead to zero net force on each atom.(A and B are just constants)

Here are plots of the Potential function, and its derivative (i.e. force). 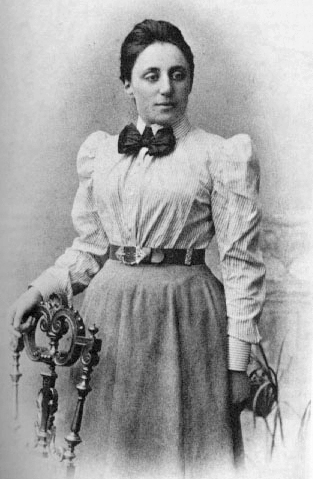 Emmy Noether was a theoretical physicist who did pioneering work in the study of conservation principles.