Using + or – signs was ok in 1 dimension but is not sufficient to describe motion in 2 or more dimensions (i.e. most of the real world)

To do: Extend definitions of displacement, velocity, and acceleration.

The previous section dealt with the motion of objects in only 1 dimension. This section deals with motion that occurs in multiple dimensions. 2-dimensional kinematics is needed to fully describe objects that move in a plane. For example, a car as it travels around a curved roadway is changing both its x and y coordinates as it advances. Or, a ball thrown across the room will move in both horizontal and vertical directions. 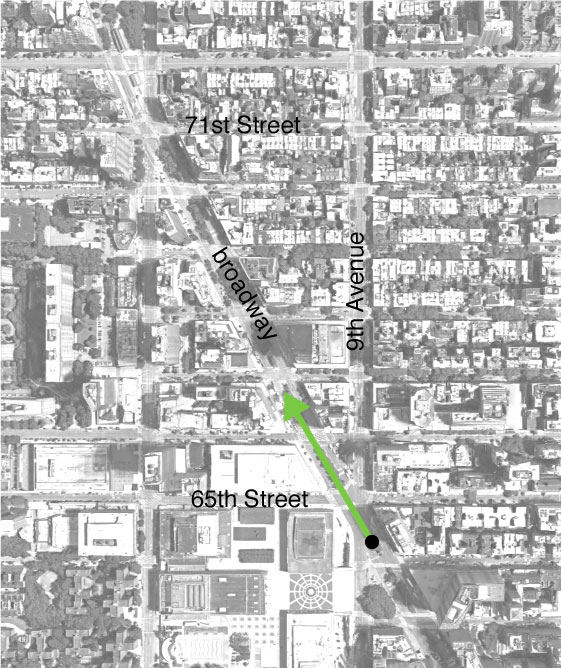 Describe the velocity vector of a bus traveling uptown on Broadway at 8 m/s. Things you know:

To quantify the total displacement, we'll use the familiar formula:

Now we want to imagine checking the position of Mr. Fly with a finer precision. This means we'll look for displacement vectors at short elapsed times.

Decreasing our $\Delta t$ time allows us to get a more complete picture of the motion.

we can see how our assessment of the velocity during a given time would be better by taking smaller times to measure.

We can even get to the limit where our $\Delta t$ is very small.

This gives us the instaneous velocity.

This way, we can imagine finding the instantaneous velocity at any point in very complicated path.

The instantaneous velocity vector is directed in a line which is tangent to the motion path, and its magnitude is given by: $$\mathbf{v}=\sqrt{\mathbf{v}_x^2+\mathbf{v}_y^2}$$ 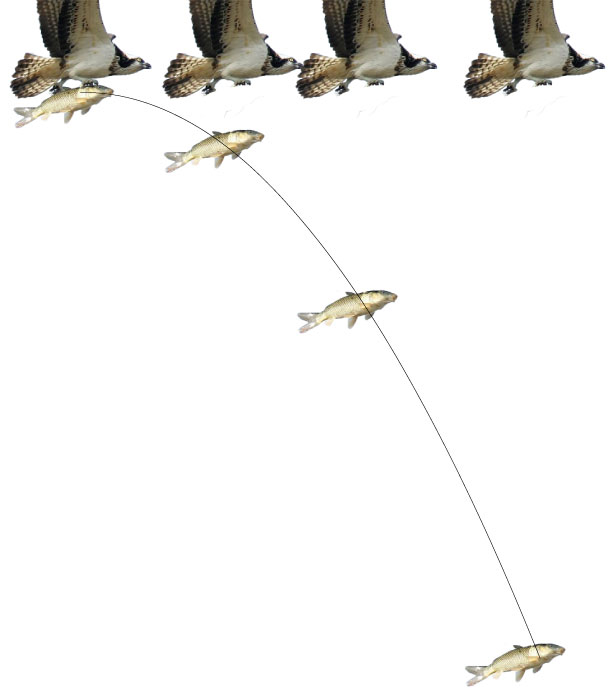 A bird drops a fish while flying. The fish falls due to gravity, but also continues moving in the horizontal direction.


How do we deal with this?

The HUGE concept for 2-D (and 3-D) motion is the following:

Motion in one axis does not interfere with or effect motion in another axis.

This implies we can analyze the motions separately, which is exactly what we'll have to do.

The equations are just the component form of the vector equations we had before. Do not think of them as eight new equations, but rather, specific cases of the general kinematic equations.

Imagine taking a series of photos at 100 ms intervals while two balls are being dropped. One is dropped straight down, the other is sent flying off in the positive x direction. The resulting image would look something like this.

Both objects have are experiencing free fall motion: they are moving under the influence of gravity only.

The green ball does have a horizontal component to its motion, but that component doesn't interfere at all with the motion in the y direction. 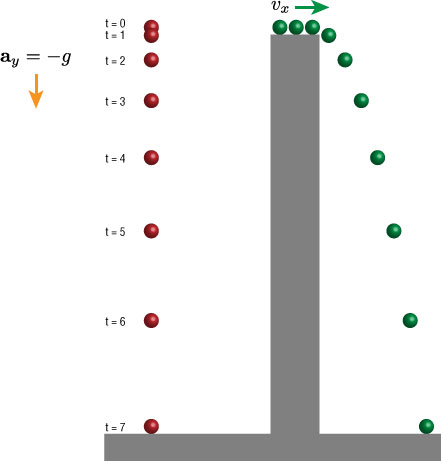 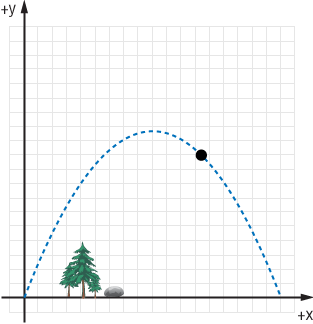 We assume that air resistance is negligible.

There is no acceleration in the horizontal direction.

For an object thrown across the room, which x vs. t and y vs. t plots would you expect?

For an object thrown across the room, which x vs. t and y vs. t plots would you expect?

A stone is thrown into the air with an initial velocity of 50 m/s at 37º to the horizontal. Find (a) the total time the ball is in the air. (b) Where does the ball hit the ground? (c) What is the angle of the velocity vector when it does hit the ground?

This rooftop bicyclist want to make to the next building. He’s moving at 4 m/s. The gap between buildings is 5 m. Building 1 is 20 meters high and building 2 is 12 m. Will he make it?

A ball is thrown at 60° to the horizontal. At which point(s) will the acceleration and velocity vectors $\mathbf{a}$ and $\mathbf{v}$ be parallel? (pick F is the answer is none, pick G if the answer is all points.) 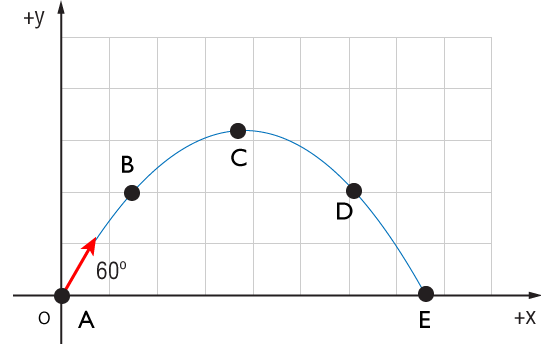 The same ball is thrown at 60° to the horizontal. At which point(s) will the acceleration and velocity vectors $\mathbf{a}$ and $\mathbf{v}$ be perpendicular? (pick F is the answer is none, pick G if the answer is all points.)

Three cars drive off a cliff...

For a projectile launched from the ground with a speed $v_0$, determine the angle of launch that will give the particle the maximum distance.

Usually, when we speak of an object's velocity, we are considering its velocity relative to the ground. The ground becomes our reference frame. We consider it to be the stationary point of reference for all measurements of velocity.

This is not absolute however. We could imagine being inside a boat crossing the ocean. Now, the floor of the boat becomes our reference frame, which is actually moving with respect to the earth.